I have a really important rule about chewing food with your mouth open.

It makes my skin crawl because I can hear saliva going into your mouth and then caking your food with your spit and it makes digestion gross. Even listening to chewing when it’s really quiet makes my skin crawl. I mean, I know that’s how it happens and it’s stinking miraculous just on a design level.

But please don’t chew with your mouth open.

But sitting next to Leo while he chews “frostin’ flakes” fills me with all of the affection in the world for his little gum smacking sound as he inhales a few bowls of cereal in the morning.

I haven’t posted in a while about how things are going because there have been very few things outside of normal four year old things happening. Leo has had two of his maintenance shots into his spine. The house endured a stomach bug, our first since his diagnosis.

And it’s pretty much smooth sailing from there.

We have exited the mind numbing emergency phase of the intensive treatment times. His energy is closer to that of a four year old boy. He’s happier. He’s crazy hungry almost all of the time. For, like, two bites of all of the different food. His taste buds are even getting back to normal.

And now we do the work of recapturing ground we lost during treatment. We are working on teaching him to eat what was made and ask for special food less. We even succeed into getting him to eat sometimes. It’s still a struggle, though. I would be a great negotiator. I can go from bargaining to threat of civil suit or even capital punishment in the blink of an eye.

The balance is returning to our house and Peter and Johanna are enjoying the more even spread of our parental attention.

I fussed at Johanna yesterday because she came in to explain to me why a sophisticated first grader like herself was above playing Leo’s favorite trampoline game. Having watched hundreds of teenagers trample on the dignity of younger children with the same logic, I decided to nip that in the bud right away. She insisted that she was right which earned her a timeout. When timeout was over she came in and said, “Daddy, can I tell you something?”

I fixed her with a strong daddy look and said, “If it has something to do with why you’re better than your brother, you’re going back to timeout.”

M’kay, so the little puddle of goo situated in the left side of my chest where once beat a solid heart insisted that we snuggle for a minute. When we were done with that I asked if she wanted to go jump on the trampoline again.

So after we came back from our walk, throwing rocks into the lake that is slowly creeping up on our neighborhood and dropping stones into fire ant hills with a “knock-knock,” she explained to me what she thought the best use for a train ride would be.

Make-A-Wish sponsored a train ride out of Ft. Worth this weekend. On our way into the city, we explained we would meet Papa and Nana there.

After the kids saw the train yard and found out we would ride one, it just escalated. Before we got underway a man walked through with an orange safety vest and a cup of coffee.

I told him he smelled pretty.

Sometimes I need to remember to not say all of the thoughts.

So after we talked away the awkward, we found out that he’s kind of in charge of these trains. Like, from Minnesota westward. He majored in bio-chem and didn’t want to become a doctor. So here he is, a pretty smelling train man. He told us that the train we were riding was only taken out for special occasions. And it was special. The eight of us, Desiree, Papa, Nana, Peter, Johanna, Leo, Judah, and I fit into one little section where we could face each other and look out through the giant windows at the passing cityscape. Superheroes, clowns, and nose painting church ladies passed through the cars. Working dogs wagged and sniffed their way child to child until one of them needed a solid snuggle on the rocking floor of the train. 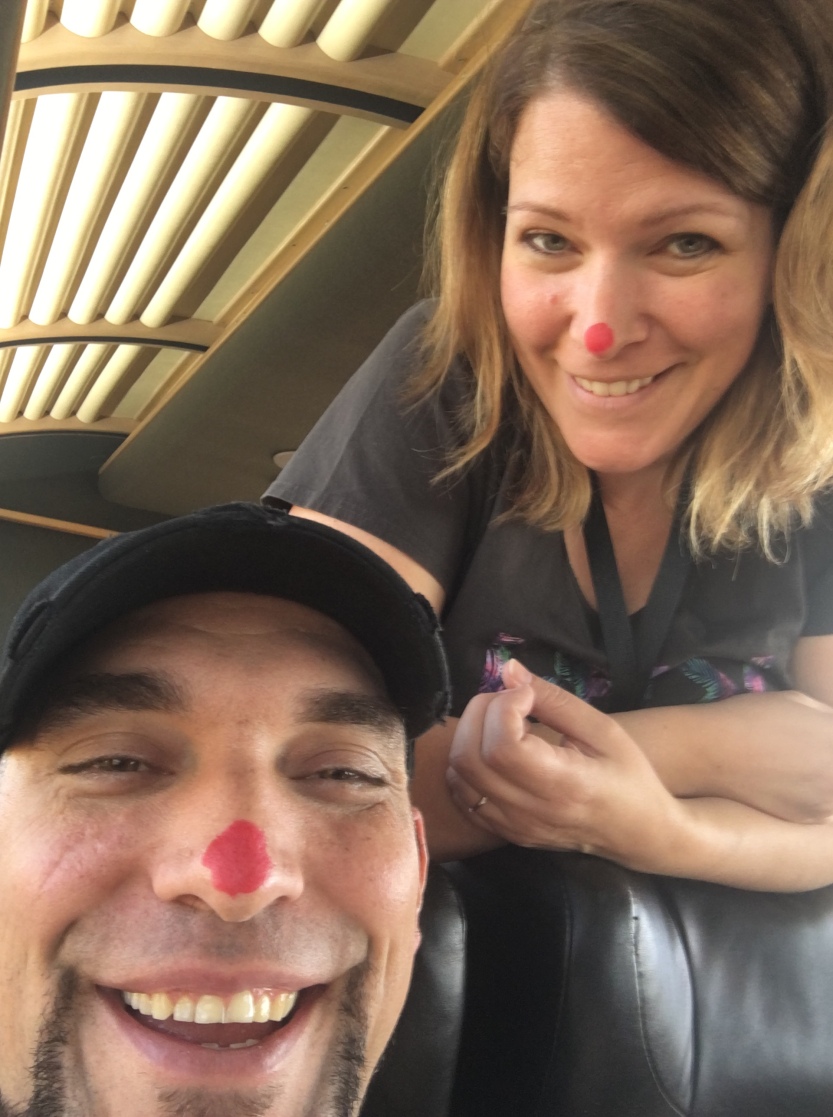 The sun has come out from its season behind the clouds, it feels. There is a lot coming on the horizon for us and we can feel the gears shifting. But there’s a sweetness, like on the train, when the brake is finally taken off and the whole thing just drifts for a moment, when there is momentum, but no rush. There is movement, but no impact. There is the reward for the waiting and an adventure and journey still ahead.